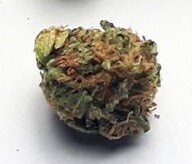 Devil’s Harvest Seeds created Rollex OG as a combination of a phenotype of OG Raskal’s White Fire (aka WiFi) and Devil’s Harvest’s own Kuchi. (It’s not the same as the similarly named Rolex strain.) Also known as Rollex OG Kush.

Rollex OG Kush is an indica dominant hybrid (75% indica/25% sativa) strain created through a cross of the powerful White Fire OG X Kuchi strains. This bud is an award winner in multiple competitions, taking home the Best Overall award at the High Times' Cannabis Cup in 2013 and in the 2014 High Life Cup in Michigan. It is infamous for its powerful indica heavy effects and insanely high THC level of 20-23% on average. The high starts with an almost immediate head rush right after smoking of cerebral uplifted energy. You'll feel creatively inspired and motivated, although the motivation will quickly subside as a heavy headed indica high washes over you. You'll become spacey and hazy with a mind free of any mental pain or racing thoughts whatsoever. This effect will spread throughout your body in buzzing waves, leaving you sleepy and completely relaxed, but ravenously hungry. These effects make Rollex OG Kush the perfect bud for treating conditions such as insomnia, chronic pain, mild to moderate cases of depression, chronic stress or anxiety, and lack of appetite. This bud has large and lumpy super fuzzy spade-shaped yellow green nugs with sparse fiery orange hairs and a thick sticky coating of sweet syrupy resin. Rollex OG Kush has a delicious aroma of earthy skunky pine with a slight pungent cheese effect that's released as the nugs are broken apart and burned. The aroma is of sweet apple with a hint of blueberry and citrus that has an earthy aftertaste upon exhale.

The top reported aromas of the Rollex OG strain are skunk, pine, and cheese. It is said to taste of cheese, apples, and pine.